PlanningWork$ is a wealth strategy group who guides and supports clients through their financial journey. Our commitment is to protect and enhance our clients’ financial quality of life.

Submitted by PlanningWork$ on August 23rd, 2016

Submitted by PlanningWork$ on August 17th, 2016

Submitted by PlanningWork$ on August 9th, 2016

Submitted by PlanningWork$ on August 2nd, 2016

August 1, 2016 — Despite ending Friday within two points of its 2,175.03 historical high, the S&P 500 posted a small loss last week, snapping four consecutive weekly gains. The benchmark equity index advanced 3.69% in July, its fifth monthly gain, and has rallied 8.82% from its June 27th post-Brexit low. Technology shares led the advance, surging 13.11% since the late-June low. Last week’s focus was on second quarter earnings and a disappointing reading of second quarter growth. With more than half of S&P 500 companies having reported quarterly results, overall earnings are now expected to decline 3.8% from a year earlier, according to Fact Set. A week earlier, when 126 S&P 500 firms had reported, analysts had projected a 4.4% earnings decline and before the earnings season start, analysts originally forecast a 5.3% pullback in profits.

Key among economic data last week was Friday’s lackluster preliminary growth report for the second quarter. In the first of three Commerce Department estimates, GDP expanded at a 1.2% annualized rate last quarter, well below economists’ projections for 2.5% growth. The disappointment was largely due to falling business inventories, subtracting 1.16 percentage points from growth. Within the report, the lone bright spot was a 4.2% jump in personal spending, up from a revised 1.6% pickup during the first quarter. Overall first quarter growth was revised lower to 0.8% from 1.1%.

What We’re Reading
European Stocks Down After Stress Test 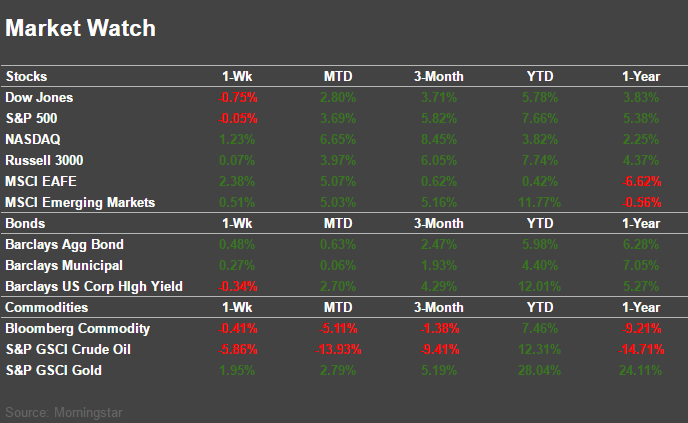 August and September have traditionally been the worst months for stock-price returns. Maybe it’s because of reduced capital inflows, vacations, upcoming earnings reality, and Mutual Funds’ fiscal year-end window dressing. Whatever the reasons, the results are unmistakable. August and September have recorded the worst two average price performances since 1945. According to S&P Global Market Intelligence U.S. Equity Strategist Sam Stovall, “while the S&P 500 rose in price in nearly 60% of all months, it advanced only 54% of the time in August and fell more times than it rose in September.”

In the S&P/Dow Jones’ chart above, Stovall alerts that August and September are ranked 11 and 12 in terms of monthly price increases since WWII. They recorded the 2nd and 3rd deepest single-month declines and are in the top 1/3rd of monthly volatility. Also, the S&P 500 recorded one-third of all monthly declines of 5% or more in August and September. Only October 1987’s drop of 21.8% and October 2008’s slump of 16.9% were worse.

This review is historical and actual results are not always gospel. However, S&P’s Sam Stovall’s admonition is that investors who are aware that the market traditionally stumbles during these two months are less likely to become their portfolios’ worst enemies by reacting emotionally. Rather, as Stovall observes, investors are more often than not better off buying than bailing.


This report is created by Tower Square Investment Management LLC

Alzheimer’s is not an inevitability in older age. It's a disease that can be defeated with awareness, funding, and research. June is Alzheimer's & Brain Awareness Month! Please enjoy this video produced by Alzheimer’s Research UK. ‪#‎sharetheorange‬

Get all of your documents in one place

Submitted by PlanningWork$ on June 7th, 2016

Life and Business Strategies...Start the Journey

A Registered Representative may only transact business in states where they are registered, or exempt from registration. Currently we have Representatives registered in CA, CO, FL, GA, IL, MN, MO, NE, NM, OH, PA, SC, and TX. If your resident state is not listed, please contact us at info@planningworks.biz. Under normal circumstances, securities licensing procedures for additional states may take 24-72 hours. We will not effect or attempt to effect securities transactions, or provide personalized investment advice to, or communicate directly with residents in a state in which a Representative is not registered.